Imru al-Qays died a poet or a king?

Stop crying from the memory of Habib and a house with the fall of the twist between entering, so he was pregnant. Imru al-Qays among us did not hear about Amru al-Qays, his hardness, his strength, his handsomeness, and his poetry that immortalized his name in history. The lover poet the king who was looking for the king of his father, who was a king, invaded the tribe of Banu Asad and then killed him after That was in retaliation for him, and then the stray king Imru al-Qais kept looking for his father’s king and in his lament for his owner who accompanied him in the search for his king at the palace of Amr bin Qumaima al-Daba’i, my friend cried when he saw the path without him and was sure that I am following Caesar, so I told him: Do not cry your eyes, but we are trying for a king or We died and were excused, and when the stray king, Imru’ al-Qays arrived at Caesar, the Caesar was impressed by the eloquence, strength and poetry of Imru’ al-Qays, and even the Caesar’s daughter liked him, but Caesar no longer had his father’s king, and after honoring him, Imru’ al-Qays went on the road and near Ankara. A king, and isn't poetry a king and talent a king?

The phenomenon of the divorce of artists in the world, we hardly hear about the news of the wedding ... 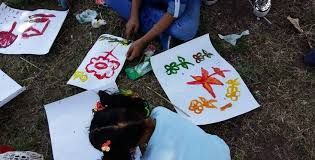 Isn’t art and its various forms guide us to the form of our child’s development, growth and awareness, and that, for example, through his drawings, we can un...

The acting profession is what it has and what it is, what if you are an actor in a comic play or a comedy series or a comedy movie, and you are among the rehears...

Music companion of the pa...

Since ancient times, music has accompanied man, his joy, his sadness, and his rituals, and man made for them their tools, laws, shrines, notes, and songs. Music ...